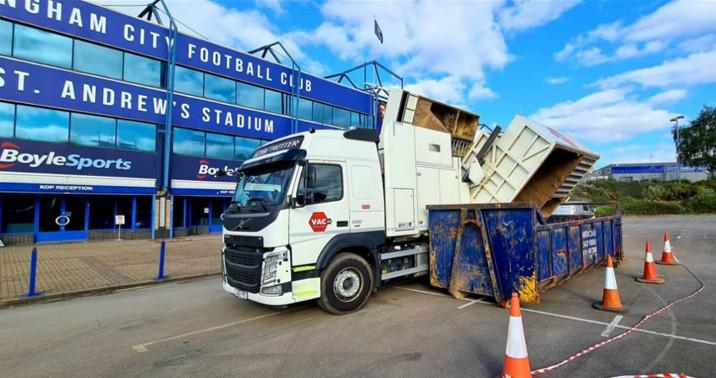 Vac UK secured a great result with the completion of works at St Andrew’s, the home of Birmingham City Football Club.

Through five weeks of vacuum excavation, the Vac UK team each day removed more than 40 tonnes of spoil and general building waste from beneath the main stand that was left behind from the original construction. The work was required to make possible a scheduled inspection of the structure.

A 45 metre chute was run from the vac ex outside the stadium to the operational area along which the unwanted material could be transported. The relatively small bore meant that it was possible to feed the chute through small holes in the walls rather than using more invasive traditional excavation methods. It also helped to keep the working area clean, avoided the need for a crew or conveyors to move the spoil and minimised noise and disruption.

Patrick Curran, Vac UK director, said that the works were a great example of the versatility of vac ex.
“In just over a month, a single machine has moved more than 1000 tonnes of material from a confined, difficult to access space beneath the stand at St Andrew’s. “ he said. “It’s been done with a small team and with barely any impact on operations at the ground. In fact, Birmingham City have played two or three home games in that time and I doubt anyone visiting the stadium would have been aware that the works were going on.”